Schedule TBA. Check back before show for an updated list of  films added to this program.

Answering life's hard knocks.
Dan Wood has lost everything, his stable job, his long-time girlfriend, and even his apartment and car. After moving back home with his mom, Dan quickly finds a job as a door to door salesmen. Here he befriends his young, rambunctious co-workers that have a fresher view on life. They teach him the hope of following his dreams again as Dan teaches them responsibility.

A man and woman struggles with ascension to the heavens when the creature the summon is less than they expected.

Deep in the dark woods, a girl in a cage is being held captive by a man with a knife.

Narrative Short
After finally getting a date with her crush, Natalie
looks forward to a night that will hopefully end with her first kiss...

Narrative Short
A man gets caught up in a love triangle among his
friends and will do whatever it takes to get the one he loves.

When eight year old Maria's  violent stepfather is hospitalized after a heart attack,  Maria' s mother is unable to cope, and Maria starts praying.  An apparition brings her an ally, or is it just a delusion?

Narrative Short
A masseuse gives her client the massage of his life.

Narrative Short
A simple Midwestern mom scours Las Vegas looking for
her young daughter and some guy named 'Kyle.' When she coaxes an irritated bar owner into helping, they discover the girl has to get out of Vegas now or risk being lost forever.

The story of a man's journey to raise money for a penis enlargement surgery after being dumped by his girlfriend.

​In a world where jobs are scarce, the environment is in decline, and war is everywhere … in a world where self-help has replaced help… where the closest thing to intimacy is an emoticon in a text message on a facebook twit post… …there is one question that rises above all others…. “How do I get a girlfriend? “Lovesick Fool – Love in the Age of Like” stars comedic maestros Janeane Garofalo, Fred Willard, and Lisa Kudrow. It’s an animated film that is adult, funny, poetic and poignant.

How to Avoid Annoying People

​Enjoy over-the-top harassment endured by a plane traveler as he thwarts the constant verbal barrage from a fellow passenger.

A lost light ray must look for a place to stay and light up for the night.

An explorer comes across an uncharted planet covered with huge mushroom trees. A hostile creature attacks and he is knocked back to his original identity.

I Need My Monster

When Ethan checks under the bed for his monster, he finds a note instead: 'Gone fishing. Back in a week.' - Gabe'

(3m, U SA) dir. by Tim Farrell
Mistor wants to teach man losers how to get sensual lady handshakes.

Good Juice
(3m, U S A) dir. by Carmen Tiffany
This animation features characters traveling through
themes of loneliness and addiction. All is fine until a tall drink of water with pink hair crashes the party.

Baxter the raccoon makes his way into Granny's Sweet Shop, but upon entering he gets so obsessed with the candy that he creates his own downfall.

A digital brain attempts to understand the two primal opposites from a survey of human opinions.

A feral cat explores the bizarre landscape of the last drive-in theater in Atlanta, GA. 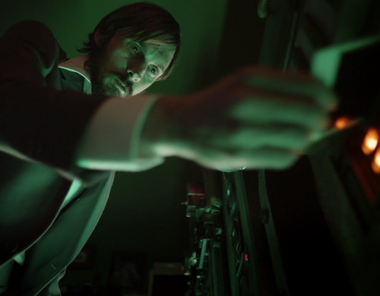 In a sleepy apartment building, three 20-something roommates discover their scientist neighbor dead. Within his apartment they find a giant experimental machine that takes pictures 24 hours into the future. The camera is aimed into the trio's apartment, continuing to run and showing glimpses of their life a day in advance.

Armed with this revelation, the three conspire to exploit the machine's abilities. After enjoying the power of being one step ahead in life, disturbing images begin to arrive. A tense love-triangle emerges, and a sinister enemy begins sniffing around. The relationships begin to unravel and the trio descends into a dark future they no longer have control of. 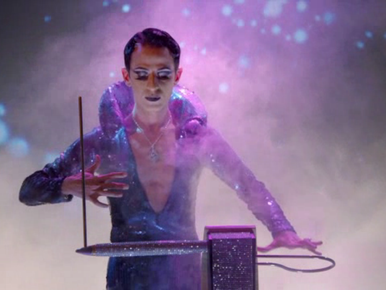 When My Sorrow Died: The Legend of Armen Ra & the Theremin

'When My Sorrow Died' tells the incredibly moving, entertaining, and revealing story of Theremin master Armen Ra's extraordinary origins. A truly remarkable being, Armen tells his life stories, which read like mythology, yet are painfully true, with the sharpest of wit, a cutting sense of humor, and deep sincerity. His story is encouraging to the discouraged, his music is the soother of the sad, and his mission is to bring beauty and compassion into a world in chaos. Armen tells of surviving exile, dealing with systematic bullying while staying true to yourself, understanding the power of image and capturing the eyes and ears of the underground of 1980s New York with beauty, both with stunning drag performances and his personality to command the spotlight in the scene. His descent into the darkness of New York's underbelly was intercepted luckily by the Theremin, the first electronic instrument ever invented. Operated somewhat magically without touch, like a magician, Armen Ra pulled himself out of that darkness, addiction, and fear by pulling ethereal music out of thin air. Glamorously eccentric and enigmatic, this life-spanning documentary mixes rare concert performances, candid interviews, and archive material with the magical power of music that alchemizes ancient sorrow into timeless beauty with such grace that it has to be seen and heard to be believed.

A Life with Asperger's

'A Live with Aspberger's' is an animated documentary that explores the challengers of growing up and living with Asperger's Syndrome. It is a voice over narrative that demonstrates that Asperger's is not simply 'being a little awkward', rather it is about adapting to one's limitations in the face of anxiety and isolation. The technique is a collage of photography, rotoscope, animated characters and live action footage.

​"Midnight" by Ships Have Sailed

(4m, U S A) dir. by James R.W. Hiatt
Music Video
In the magical world of a traveling circus, a clown
falls in love with his adagio partner, who is seduced by the smarmy ringmaster.

(9m, U S A) dir. by Terry Hill
Narrative Short
In Grey Matter a Black suburbanite is confronted with
his more 'urban' alter ego.

​Time's Up
(11m, U S A) dir. by Moses Jones
Narrative Shorts
When Tiggy gets caught up in an unfortunate situation,
he's forced into a predicament that leaves him looking for a way out before his time's up

​Narrative ShortFeeling out of place at an upper class Christmas party,a pair of bleak, pretentious musicians berate the host's choice of music to an inebriated guest, all the while discordantly explaining and shamelessly praising their own work.

The Meteor
(14m, U S A) dir. by Charles Griffin Gibson
Experimental Short
The meteor that hit the United States in 2014 caused unbelievable damage to the nation. This film is an exploration of the strange aftermath.

Olav Zanger is a solitary fisherman that seeks revenge on the 'Dimpled Chin Schlock Fish', a psychopath creature that leaps out of water and rips his eyeball off.

He Loves Her, She Loves Cake

A deliciously classic tale of a woman, a man and dealing with love handles.

Reaper
(13m, U S A) dir. by Richard TavernaroNarrative ShortA young soldier is lost and cut off behind enemy lines until a stranger arrives and promises to get him home 'safe and sound'.

(6m, U S A) dir. by Joe Zohar
Music Video
An abused southern housewife has a unique way of dealing with her abuse.

Fix You
(3m, U S A) dir. by Christian Juru
​Narrative Short
The story of two childhood friends who awaken dormant feelings after one falls in a deep slumber caused by a shocking 'heartbreak.'

Halloween Judge
(4m, U S A) dir. by Gordy Hoffman

Halloween Judge is always there to advise, correct, direct and explain your Halloween.

(22m, Brazil) dir. by Ane Siderman​Narrative ShortBibi  lives alone with her cat in her apartment and decides to help her neighbor Juliet in a crisis. They create a relationship that ends up surpassing limits.

The Embalming
(16m, U S A) dir. by Matthew Graves
Narrative Short
On a dark and stormy night, a disgruntled funeral home director is visited by an odd group with a simple request.

Freestyle
(7m, U S A) dir. by Lexi Lefkowitz
Narrative Short
​Violet is an isolated, but spunky, 7-year-old trying to fit into a world she doesn't quite understand.

An accident, a gun, and a moment in time

creates an opportunity for a woman to end her abusive relationship forever. Will she take it?

​The Routine
(10m, U S A) dir. by Brian GrohNarrative ShortTechnology fails a woman isolated in her home.

Ain't That a Bitch Shorts Block